Hello! Welcome to Critical Recap! I’m Dani Carr, the Critical Role Lore Keeper, and I’m back to bring you recaps for Exandria Unlimited! Let’s dive into our recap of ExU Episode 1 The Nameless Ones!

“TIME IS A WEIRD SOUP”

On the continent of Tal’Dorei, in the city of Emon, five people are beginning to greet the day. Orym of the Air Ashari, a halfling fighter, takes a walk to Greyskull Keep, while Fearne Calloway, a faun druid, picks flowers with the aid of her fire elemental monkey Mister. Back at their rented townhouse, the air genasi bard Dorian Storm strums his lute and reminisces about his home of the Silken Squall, as well as meeting the others at the Everdawn, a huge party celebrating Civilization’s Dawn.

The dwarf sorcerer, Dariax, awakens on the roof after a night of drunken antics and Opal, the human warlock, readies her look for the day. Oddly, she can feel the presence of her sister Ted, though her twin is supposed to be far away from her right now. The group of five recent friends meet back up in the townhouse and leave to find food at the tavern The Third Wing.

As they dine, they recall various pranks and a literal pissing contest the previous night, but they each draw a blank as they try to remember the last six days since they met each other at a party. They remember footprints leading out of Thordak’s Crater and heading to the Scar of the Cinder King and a rich man named Lothor who is letting them stay in his townhouse. Beyond that, they’re unsure. Dorian feels like they’re missing someone.

They leave the tavern and Dariax shows them how he uses his compass to pick new directions to travel. As they discuss this, Orym notices someone in a red leather duster etching something into the door of their townhouse. They surround the person, a woman named Poska who tries to pretend she’s just a gardener, but eventually reveals herself to be a member of a new thieves guild that has sprung up after the clash between the Myriad and the Clasp a couple years ago.

She was marking the townhouse to be picked over by her associates, since it belongs to a rich family of gentrifiers, but this group is very clearly not rich. She offers to remove the townhouse from her list if they do something for her. Opal, instead, calls for the city guards, but then calls them off once Poska agrees to talk more. Poska claims that her group, the Nameless Ones, has the city’s best interests at heart. She explains the current gentrification of the Upper Slums and how the Nameless Ones are trying to put an end to it and return the area to the people.

The others are intrigued by Poska’s criminal lifestyle, with some having issues with how Emon is guarded and the facets of corruption in the city. Poska offers them a job – go to the docks and find her something valuable, then drop it off at her warehouse. If they do this, she’ll take the townhouse off the bad list and give them money and information. Though Dorian and especially Orym are hesitant, the five eventually agree to take Poska’s job.

The group heads to the docks and Opal enjoys her first ever sighting of the ocean. They find the same symbol that Poska etched onto their door on a post for Dock Four and decide to board a large Issylran ship that is docked there. They pretend to be part of the crew and make it on board the ship, called The Blight Star. The ship itself is currently crewless, which strikes them as odd. They start to head below deck and Orym falls through the floor.

He’s fine, but he’s surrounded by a magical darkness that light cannot fully penetrate. Everyone joins him and they begin to search the hold. Dorian finds the murdered bodies of the crewmembers and they realize the assassin is still in the room. Fearne gets a cut on her arm and Orym strikes someone, but the assassin disappears without a fight. They continue investigating the room, finding 500 platinum and a dark black crate. Within it is a barbed onyx circlet that makes both Dorian and Orym sick when they get near it, but the crown doesn’t affect the others.

They decide to take the circlet with them and give the boat one last cursory look, finding an adult ankheg caged in another room. Fearne is tempted to release the ankheg, but they leave it behind and depart from the boat, the circlet in tow. A figure in the crowd of people stares at Fearne. When Opal makes a show of intimidation, the figure disappears in a swirl of black smoke.

The group finds the warehouse that Poska mentioned, but they hesitate on whether to leave the circlet for her. It feels like something too dangerous to give to a criminal. They decide to just give her the bag of money, so Opal takes it inside the empty warehouse and drops it off, though she doesn’t mark it with the illusory script like Poska requested (due to not knowing what illusory script is.) But before they can leave, four shadowy assassins appear and chase them all inside the warehouse.

They fight the assassins, who demand that they be given the circlet. The party manages to kill all four, but they are no closer to understanding why the assassins or the Nameless Ones want the spooky crown. They search the warehouse and break open a door, where they find crates of refined residuum in boxes from Zephrah, Orym’s home. Residuum is an amplifier for magic and can be used in making magical items, can be converted into suude (a popular drug), and can be used to replace magical components in spells.

This residuum was clearly stolen, but they’re not sure what to do about it. They’ve trashed the warehouse and Poska will likely know it was them. Orym wants to inform the Fire Ashari that are in town working with the Crater and the Scar about the stolen residuum. At the very least, they might be able to get a message to someone Orym knows in Zephrah. Orym came to Emon to help, not to become a criminal or whatever it is they’re currently doing. They decide to go with Orym to the Ashari, putting their trust in him despite the target on their backs now, and leave the warehouse behind.

Poska enters her warehouse and sees the bodies and the destruction. She sends a message to someone through the tattoo on her wrist, telling them to burn it down. Across town, the townhouse goes up in flames.

That is it for Episode 1 of Exandria Unlimited!

Anyway, catch Episode 2 on Thursday, July 1st at 7pm Pacific on twitch.tv/criticalrole and on youtube.com/criticalrole or a week later on our podcast. Is it Thursday, yet? 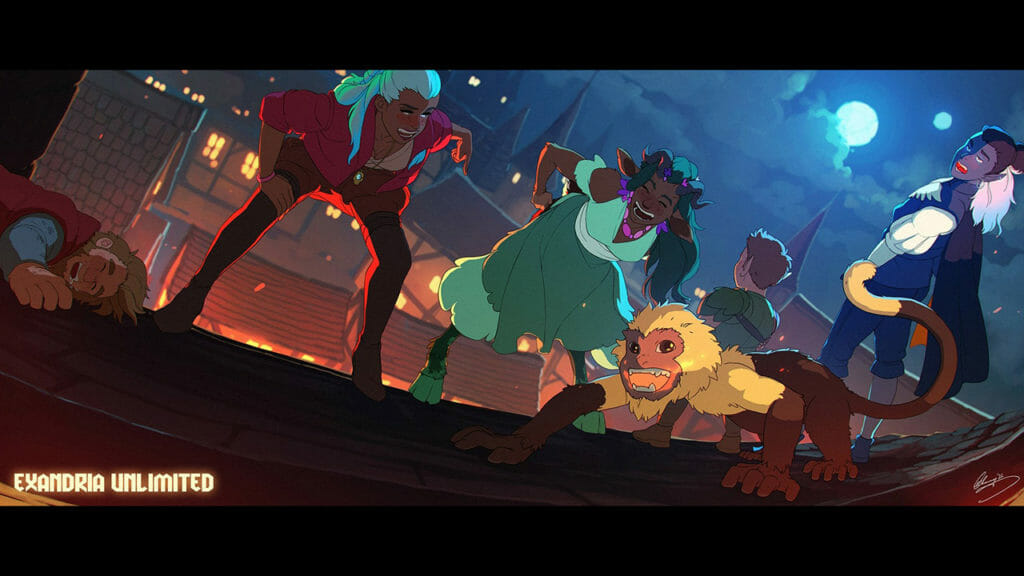