Bells Hells find themselves on the outskirts of a dark, twisted version of Whitestone – a Whitestone inspired by Laudna’s past in the city, when it was occupied by the Briarwoods. They walk the streets, with the large and twisted Sun Tree as their destination, but the city’s nightmarish stone buildings continually shift, trying to redirect them away from the tree. As they walk, bones erupt from the ground in a 20 foot wall, blocking their path.

Orym climbs this wall of bone and sees a maze of buildings in the distance, shifting and vanishing and reappearing. Ashton chips off a piece of the bone, which begins to bleed. Orym moves along the rooftops, guiding the group through the maze. When they try to move to a newly opened path, a building attempts to cut them off, so Orym stabs the roof. It bleeds and causes more bones to erupt from the roof, but they make it to the new path.

In this new area, Bells Hells spy a young, pre-teen boy talking to a flickering shadow girl – the spirit of Laudna. The boy asks little Laudna, who he calls Matilda, to play a game with him. It’s called Secret Treasures, where she tells him a secret and he gives her a present. Imogen telepathically tells the little girl not to trust him, so Matilda backs away. The boy gets angry and throws dirt at her, but she disappears. They watch the little boy walk away, the color leaving his body before he vanishes into the city.

Imogen reaches out with her telepathy, calling out to Laudna/Matilda, who tells her that she is playing in the barn. When they try to get to the barn, the city attempts to cut them off with obstacles of buildings and bone, but they successfully outrace the city’s will. The barn itself is covered in creeping vines, but within the hayloft is an even younger shadow version of Matilda playing with her handmade dolls and surrounded by drawings.

Matilda tells them that there is a mean woman at the tree who won’t let her leave. Ashton asks about one of the drawings, which is just black scribbles. Matilda tells them that is what is beyond the city and the tree. Chetney notices the ivy is covering the entire barn and blocking the exits. He tells them that this is a trap and they need to leave. Matilda disappears and the group fights their way out of the vines, with Chetney using dynamite to clear an area for their escape.

As Bells Hells try to make their way to the Sun Tree, the buildings block their progress once again. They pick a direction and spot a building ahead with a light inside. Imogen reaches out to Laudna, this time hearing an older Matilda. She tells Imogen that she is busy getting dressed to attend a dinner. Imogen tells her not to go, but the others remind her that she can’t change the past. Imogen believes that warning Laudna could possibly distract Delilah or make her weaker.

Fearne and Imogen approach the house, peering in through a window. They see an older woman and an older man getting dressed and the woman hands an outfit to another shadow Matilda. Imogen talks to Matilda, telling her that something bad is going to happen and to come find them when it gets scary so they can get her home safe. Matilda puts her hand to the glass, across from Imogen’s.

The mother is frustrated with Matilda’s distraction and tells her they have to go soon. They both call Matilda ‘Laudna’, indicating that the illusion is losing control. Imogen tells Matilda that it’s not real and to remember who she is, but Matilda goes upstairs to get ready. Imogen angrily tells the mother and father that they’re coming for Delilah and Fearne says they made a promise to save Laudna. The mother and father spirits attack the group and attempt to possess Fearne, but they are destroyed by Ashton and Chetney.

Bells Hells head to the tree, the path finally straightening out for them. Chetney and Imogen take their potions of possibility, hoping to use the luck motes within to turn the tide in their favor. As they approach the Sun Tree, Delilah Briarwood appears in front of them as a vaguely feminine swirl of purple shadow and power. Orym spots the purple glow that is Laudna up in the tree’s canopy, trapped in a cage of branches.

Delilah and the group have a conversation. Laudna is the most convenient option at Delilah’s disposal but she has other time-consuming avenues that she can utilize in order to return to life. Chetney thinks Delilah is bluffing, that she’s actually very short on options. Delilah claims that she and Laudna are one being – if Laudna lives, then so does Delilah. Laudna was born with a gift that Delilah did not expect, having only chosen her originally in order to prove a point.

The only choice Delilah offers is to either revive Laudna along with her or let Laudna die and she will simply return another way. Chetney sees through Delilah’s nonsense and insists that they talk to Laudna. Delilah brings Laudna’s branch cage down. Laudna has been reliving her trauma, but now she can hear Imogen, who tells her to fight and that they’re going to get her home. Delilah returns Laudna to the tree and Imogen launches a psychic attack against the necromancer, initiating combat.

It’s Bells Hells vs. Delilah Briarwood and the fight is intense. Orym focuses on trying to get to Laudna in the Sun Tree, but has a difficult time getting to her as the tree swallows Laudna’s cage into its trunk. Delilah has a shield from the tree and summons a few skeletons, but FCG uses destroy undead for the first time and annihilates all but one skeleton. FCG also casts spiritual weapon in the form of Pâté, attacking the shield and destroying it.

Fearne casts earthbind on the shadowy Delilah, keeping her tethered to the ground. Imogen utilizes a new ability to call upon the magic of Ruidus, which seems to injure both her and Delilah. FCG is knocked unconscious and their spiritual form vacates the battlefield, returning to their body in Whitestone. Fearne figures out that lighting the tree on fire also hurts Delilah, so attacks become focused on the Sun Tree.

Orym attacks the tree, trying to get to Laudna, but his efforts get the attention of Delilah, who knocks him unconscious and back to his body. The tree is in flames and Delilah is falling apart, but her anger is fierce. The motes from the potions of possibility have come in clutch for the entire battle and Imogen uses her last one to successfully avoid a spell from Delilah. Imogen chooses to cast lightning bolt on the Sun Tree, which splits the tree. They see Laudna’s spirit freed, hear Delilah’s scream of rage, and wake up in their bodies on the floor of Pike’s home.

That is it for Episode 37 of Critical Role!

Catch Episode 38 on Thursday, October 13th at 7pm Pacific on twitch.tv/criticalrole and on youtube.com/criticalrole or a week later on our podcast. Is it Thursday yet? FAN ART GALLERY: Beneath These Boughs 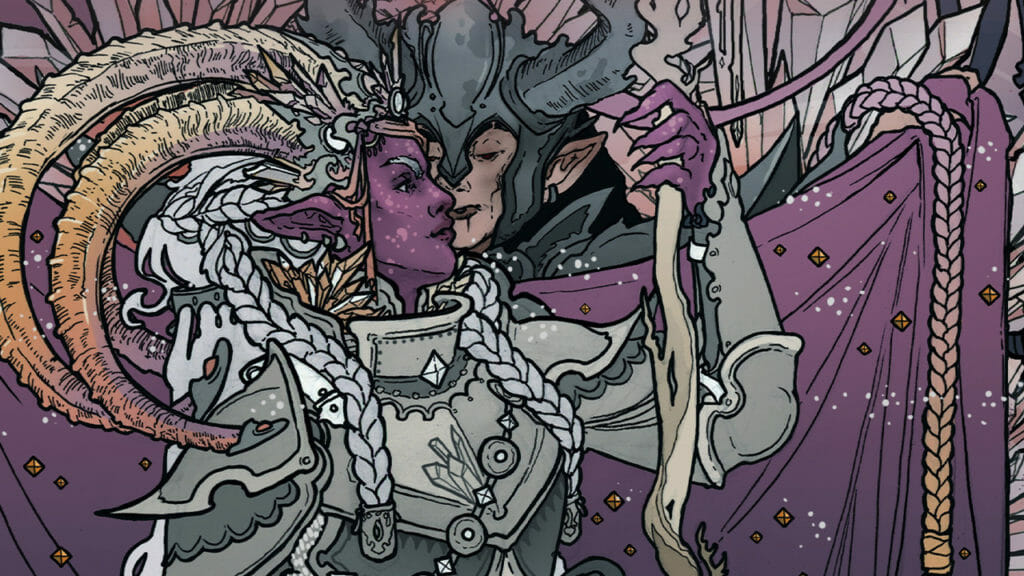