Bells Hells return to Jrusar and rest at the Spire by Fire tavern. Ashton dreams of fragments of their life – holding an adult’s hand, the ground breaking apart, wandering north up the Hellcatch Valley, and then the night of the failed burglary of Jiana Hexum’s estate. He sees flashes of the Nobodies, of staying too long because of lingering mysteries, then reaching into a crate and a striking white light. Ashton dreams of being a thousand pieces, then whole again, waking up in the Krook House to Milo asking if they’re okay.

In the morning, the group heads to Jiana Hexum’s estate, finding her in the middle of a violin lesson. Imogen recognizes the teacher, Dinah Veshur, from a poster at the Dreamscape Theater. They tell Jiana about the events and deadly traps of the museum heist and Ashton shows her the paperwork he stole from Evon, pleasing her. Jiana pays them and expresses her interest in hiring them again in the future. She also confirms that Ashton’s debt is officially paid.

Jiana requests a few minutes alone with FCG, though she allows Ashton to stay. She examines FCG very invasively, asking who constructed them as she touches their face. FCG tells her about Dancer, though also requests that Jiana not touch him like that. FCG thinks that other automatons are treated poorly and Jiana explains that the other automatons aren’t sentient like FCG is – he’s unique. FCG thinks she should try talking to the automatons and not just poke and prod. Jiana asks to be informed if they meet others like FCG and tells them that Aeshanadoor or Ank’harel might have more information on automaton construction.

During this conversation, Ashton notices a container that looks similar to the crate from the burglary. Afterwards, the group discusses their dislike of Jiana and Ashton mentions their difficulty remembering the details of the burglary. Imogen and FCG offer to mind meld with him later to see if it will help. FCG wonders if Dancer didn’t tell him everything about his construction, which was four years ago. FCG wants to reach out to other automatons they meet – maybe they just need to speak the right language or find the right switch to wake them up.

Bells Hells go see Lord Eshteross, who tells them that Lady Emoth’s interrogation pinpointed Armand Treshi as a conspirator. The others in Mahaan Treshi have rescinded their support of Armand and his push for Paragon’s Call to be instilled in Jrusar has stalled. Orlana Seshadri has taken over the investigation, but Armand has fled the city and headed to Bassuras, the home of the Paragon’s Call. If Bells Hells go to Bassuras, they could find him using the tracker they planted on him at the ball and arrest him.

Eshteross can give them his skyship to get to Bassuras, which has just returned from its trip to Whitestone with a letter from Lady Vex’ahlia, thanking them for sending Bertrand’s body for a proper burial. Eshteross gives them a map of the Hellcatch Valley, a land that was heavily scarred during the Calamity and is marked by treacherous sinkholes leading to underground tunnels. As long as they return before the skyship is needed for business in a month, Eshteross will allow them to use the skyship to travel to Yios after they deal with Armand.

Bells Hells accept the mission, not wanting to leave loose ends. Eshteross recommends that they keep a low profile in Bassuras – Ashton knows the town, which is a bit lawless with multiple factions claiming leadership. The skyship will be ready tomorrow. Eshteross will even bake cookies for them! He is pleased to employ individuals who are capable and of like heart.

Bells Hells go to Dayal Hall, an educational institution open to all. Though Chetney nearly gets them kicked out, Imogen convinces the guard to let them see Ajit Dayal by name dropping his friend Gryz Alakritos. Ajit kindly ushers the group to his office so they can speak privately. Chetney explains his lycan connection to Gurge, which Ajit immediately understands. Ajit became friends with Gurge when the Gorgynei saved him and his wife from a creature in the Heartmoor. Ajit helped the Gorgynei procure supplies for a while in thanks for their help.

Ajit offers to help Chetney cure his lycanthropy, but Chetney wants to learn more about his condition first. Ajit supports that, but he warns him that the life of a lycan is fraught with danger and regret, though the Gorgynei have utilized techniques to help control the beast within. People tend to hunt werewolves, which is why the Gorgynei moved away to the Gloomed Jungles. Ajit tells them to mention his name to Divaasheela, their leader. Chetney can find them by howling at dusk – the Gorgynei will come to him.

Chetney asks if they can do anything for Ajit in return – he simply would like to know how the Gorgynei are doing. He thinks there is good in everyone, it simply needs to be given room to shine. Ajit leaves them and Bells Hells discuss Chetney’s lycanthropy. He claims that the incident in the museum when he slashed Orym is the first time he’s ever lost control and attacked a friend. Normally he is in complete control, but if he’s taken a lot of hits in battle, then give him some space.

Bells Hells go to the Trove of Marwa for supplies. Marwa just got a pawned box from someone and shows them a Horn of Silent Alarm, a Butcher’s Bib, and a Portable Hole. The group buys all three items and then go to the Krook House, where Milo makes a propeller for FCG. Ashton asks Milo what they remember about the Hexum job, but Milo can’t recall many details about it, either. Jeto was in charge of that job, but they can’t remember what they were looking for there.

Milo recalls getting hit with a wave of something, then running out and finding Ashton. They found whatever they could and rebuilt Ashton, who was clutching a crystal vial in his hand. Nothing else was working, so Milo tossed in the contents of that vial. That’s when Ashton sparked back to life. Ashton warns Milo to be careful and to lay low – things are getting weird.

Back at the Spire by Fire, Imogen and FCG try to mind meld with Ashton, both casting detect thoughts and peering into their mind. They see flashes of the night of the burglary, of Ashton opening a crate with the hammer. They see him pull out the glass vial, then red runes glowing on the ground, then Ashton’s fall. They hear someone say to leave him, then they see light and Milo asking if they’re okay.

Imogen and FCG pull back to check on Ashton. He’s okay, until FCG drops calm emotions. Then he punches a wall repeatedly. Ashton knows they’re going to have to find the Nobodies and find out what happened. They all met in Bassuras, so maybe some of them are there. The group rests and Orym uses the sending stone to check in with Dorian and tell him that they’re heading southeast.

That is it for Episode 22 of Critical Role!

Anyway, catch Episode 23 on Thursday, May 12th at 7pm Pacific on twitch.tv/criticalrole and on youtube.com/criticalrole or a week later on our podcast. Is it Thursday yet? 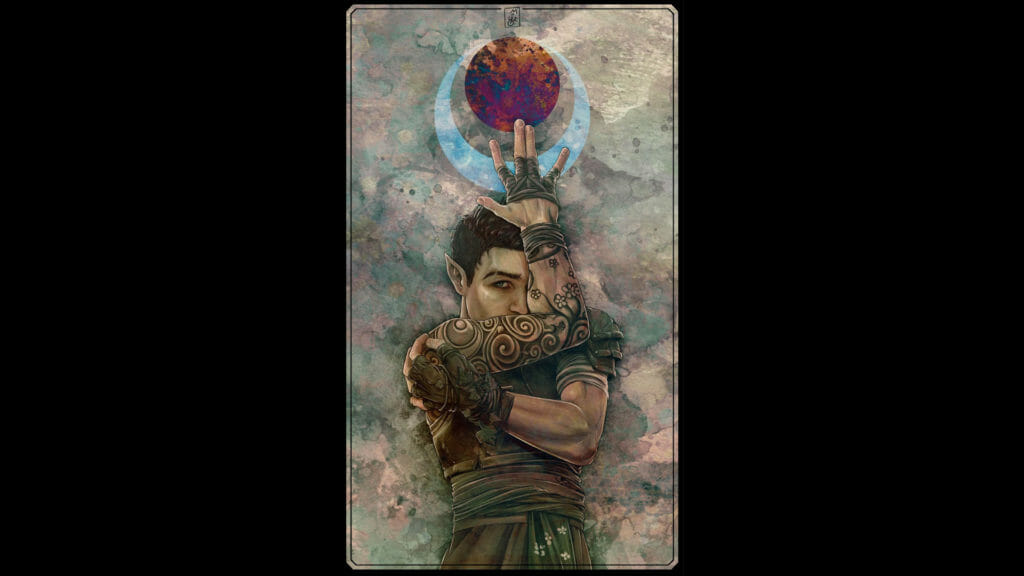