Chaos erupts at the Seat of Disdain as an unknown group attacks one of the fortress’s walls, aiming to destroy the mammoth-crawler that is carrying the crates for Paragon Call’s important shipment. Bells Hells assume that the bounty hunter Artanna Voe is using the attack as cover to abscond with Armand Treshi. Chetney, Imogen, and Orym attempt to grab Treshi first, while the others focus on the attacks on the wall.

The mammoth-crawler is the focus of multiple explosions, which results in several of the crates being broken – including one of the blue Treshi crates from Ashton’s past. Ashton and Fearne focus on the crates, with Ashton grabbing three of the crystal vials from the shattered crate and Fearne grabbing one of the black lockboxes that bears the crest of the Cerberus Assembly. The crystal vials contain a viscous gray liquid.

Laudna wants to plant the tracker ring on the mammoth-crawler, but the crawler collapses during her attempt to do so. She switches her tactics, climbing up the wall of the fortress to one of the high balconies, hoping to find a high-ranking member of Paragon’s Call. She finds Otohan Thull, who sees her before Laudna casts darkness and plants the ring on Otohan’s strange mechanical backpack. Laudna escapes without injury and joins the others in the courtyard, where FCG has obtained a skirmisher crawler.

Meanwhile, Chetney, Imogen, and Orym rush to the basement but discover that Artanna Voe has beaten them to Treshi, though he is still locked in his cell. Imogen incapacitates Artanna with a psychic attack and Orym grapples with her. He convinces her to assist them, as they’re both trying to get Treshi out. Chetney unlocks the cell door and intimidates Treshi into jumping into the portable hole. Imogen doesn’t like trusting Artanna, but the bounty hunter joins them when Orym tells her they’re taking Treshi back to Jrusar, as their paths are not so different.

They follow Artanna back through the fortress but are quickly discovered by guards. Imogen telepathically tells Artanna to play along, tackling her and putting unlocked manacles on her to keep the guards away. However, they are soon discovered by General Ratanish. Imogen throws Artanna to him to maintain their cover, knowing that Artanna’s hands are free. Artanna escapes her manacles and turns invisible and the others head to the courtyard, ostensibly to look for her.

Both groups head to the back gate, with FCG driving the stolen crawler. Fearne and Ashton struggle to get the gate open, but are eventually successful with the aid of Fearne’s telekinetic ring. Orym notices a figure jump from the balcony to the wall and assumes it to be Artanna escaping the fortress. Imogen, Orym, Laudna, and Fearne pile into the crawler while the others take off on foot, with all agreeing to reconvene at Imahara Joe’s.

However, a figure is waiting for them in the street – Otohan Thull. She attacks the crawler, destroying it, and demands a conversation. The device beneath her coat flickers and around her appear three shadowy versions of Otohan, called echoes. Orym recognizes these echoes as the same ones who killed his husband Will during the attack on Zephrah, the Gray Assassins.

Otohan is impressed by the group’s brazen infiltration of Paragon’s Call and wants to know who sent them. Imogen casts hungry torrent, causing a storm to erupt beneath Otohan’s feet and immediately destroying her three echoes. Otohan recognizes Imogen and pierces Orym’s mind, learning that their employer is Lord Eshteross. She asks what they know and decides to find out if they are weak. She summons three more echoes and initiates combat.

Bells Hells attempt to flee, hoping to scatter, but Otohan and her echoes are too fast. The echoes immediately knock Ashton unconscious, though Orym brings them back up with a potion. Imogen flees to a house, as Otohan is focused on her, and Chetney wolfs out. Otohan fights using a combination of sword and psychic attacks and fast movement. She can teleport by switching places with her echoes, leap great distances via her Psi-Powered Leap, and uses her Legendary Actions to dash around the street.

She attacks Orym, Ashton, and Fearne in quick succession, knocking all three unconscious. Laudna heals Ashton with the spell wither and bloom, which gets Otohan’s attention. She knocks Laudna unconscious, but Delilah stabilizes her from within. FCG heals Fearne, who heals Orym via Mister. Otohan taunts Imogen, drawing her out. Imogen flies, demanding that Otohan stop this, but Otohan is annoyed by her friends’ resilience. She decides to be more complete with her job.

Otohan attacks Orym, who was about to use the sending stone to contact Dorian. She comments that she has met Orym before, then stabs him. In Orym’s final moments, he feels a heavy sense of failure, but he knows he will see Will and Derrig, his father figure, again. Otohan kills Orym. She then goes to Fearne, telling her that she carries the seed, but not as strongly as others, and knocks her unconscious.

Imogen attacks her, but the attack only seems to please Otohan. She dashes back to Fearne and Laudna messages her, saying that they know where Ira is. Otohan confirms their knowledge by probing Imogen’s mind. She threatens Fearne, so Laudna tells her that they know where the leylines are converging, but Otohan knows this, too. Otohan’s focus remains on Imogen as she stabs Fearne. In Fearne’s final moments, she comments that she had a hell of a run. Otohan kills Fearne Calloway.

Otohan knocks Chetney unconscious, continuing to provoke Imogen by telling her to embrace what she’s running from or perish like her friends. Imogen can feel the energy of the storm in her stomach, the same storm of her nightmares, and she fights its call. She refuses to surrender to Otohan and attacks her with a witchbolt. Otohan holds onto the magic tether and urges Imogen to give in or die. Only the strongest are needed.

Laudna casts another wither and bloom, healing Chetney. Otohan looks to Laudna, asking Imogen if she is her favorite. Imogen immediately gives in, telling Otohan that she will go with her. But Otohan tells her that she must let go when the time is right. Otohan dashes to Laudna and knocks her unconscious, taking away two death saving throws and leaving Laudna clinging to life. She tells Imogen to give into her nature.

The storm within Imogen pulls her under in crackling fury. The landscape turns red and the slowly dissipating dust storm freezes. Imogen’s hair levitates around her and her skin turns a deep crimson hue. The lightning bolts on her skin glow and cover much of her body. Imogen screams and unleashes her pain and anger. The buildings tear away in a whirlwind and everything goes to white.

That is it for Episode 33 of Critical Role!

Catch Episode 34 on Thursday, September 15th at 7pm Pacific on twitch.tv/criticalrole and on youtube.com/criticalrole or a week later on our podcast. Is it Thursday yet? 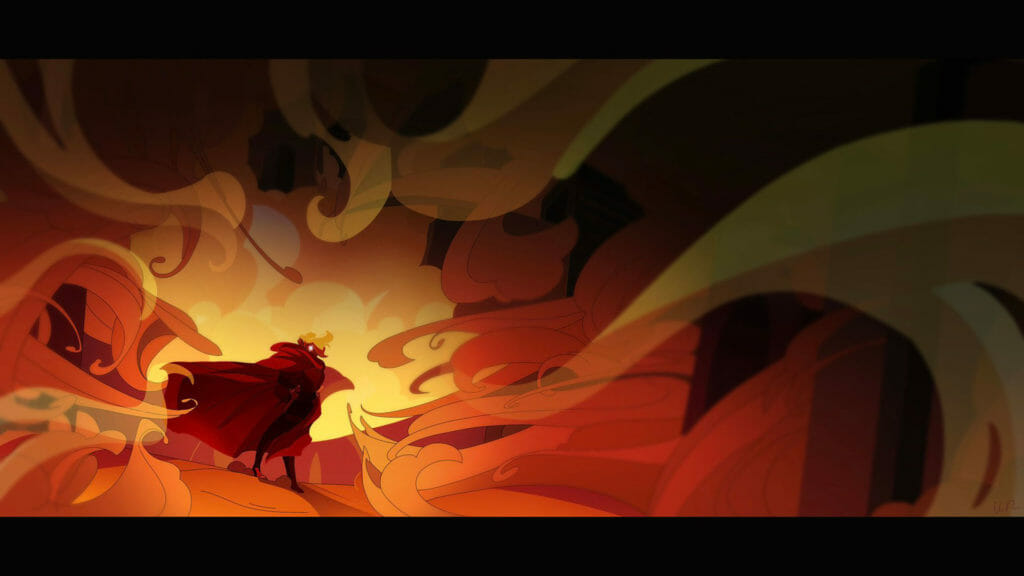