In the middle of the night, Chetney goes to the Prism Emporium, seeking revenge against the store’s owner, Tuyen Otwana, for overcharging him for a chisel. He sneaks inside through her chimney and intimidates her from the shadows, telling her she needs to charge fairly for her wares. He wolfs out and attacks her, then cauterizes her wound and tosses her a healer’s kit. She promises to adjust her prices and he flees into the night, other townspeople just catching a glimpse of his lycan form before he turns invisible and sneaks back into the Spire by Fire with none the wiser.

The next day, Bells Hells experiment with their Portable Hole, learning its capabilities and giving it to Fearne to hold onto. Orym gives Chetney the alarm horn from Marwa’s as a gift and Chetney gives Orym his wood-chiseled present – a beautiful box that incorporates a Catha and Ruidus design, harkening to Orym’s tattoo. The group purchases some basic supplies and return to Eshteross, picking up their freshly made cookies and receiving some words of encouragement from him.

The group heads to the Aerie Spire and board the Silver Sun skyship, where they meet the crew: Captain Xandis, a tiefling with a playful streak; First Mate Khalil Benes; the cook Denalia; and deckhands Tarana and Gordi. Bells Hells introduce themselves with their various specialties – Ashton is the leader, Fearne is organization, FCG is counseling/morale, Laudna is art department, Chetney is a master craftsman, Imogen is human resources, and Orym is security.

The skyship takes off, heading southeast to the Hellcatch Valley. As they travel, they pass over the Rift – the line where the greenery of the jungle stops and the valley begins. This land was heavily impacted by the Calamity. The Rift marks where the land fell about 300 feet from the jungle and became a dusty crater pockmarked with sinkholes. This area is the Hellcatch Valley.

At the edge of the Rift sits the Green City, Gujjar-Serai, whose governing body believes they have jurisdiction over the valley. The crawler gangs, or Crawlers, who actually live in the valley dispute their claim. These are various factions who believe in no centralized law and ride large scrap metal constructs, also known as crawlers, through the valley.

While traveling, Ashton explains that he is more or less from Bassuras and that they left because it’s not a good place – it’s only a place for those who are running away from something worse. Captain Xandis explains that they have nowhere to park the skyship in Bassuras, plus it would likely get stolen if they did, so the ship will drop off Bells Hells and then go park somewhere else. Imogen will let the captain know when they’re ready to leave and the crew will pick them up in a day or so.

Orym spots a shadow in the clouds, which is revealed to be two skirath hunters – flying manta ray-like creatures. The skirath hunters attack and a fight ensues on the deck of the skyship. Ashton uses a new chaos magic ability, which creates portals that he can attack and travel through. After killing one of the hunters, Orym is knocked off the skyship. Laudna casts featherfall, slowing his descent. Ashton kills the second hunter, but Orym is slowly drifting away.

Then Imogen, on instinct, begins to fly. She flies over and rescues Orym, with no one more surprised by her ability to do this than Imogen herself. She has never flown before and had no idea that she could. Later, FCG tells Imogen that they might have a way to bridge a connection between Laudna and Imogen so that Laudna can experience the storm dream with her. Imogen agrees to let him try it when Ruidus is closer to its peak, to more likely catch a dream.

The third day of travel is fairly easy. That night, Laudna checks in with Imogen, wanting to see how she is feeling. Imogen opens up to her about the Gnarlrock shard, the crystal that she took from the Shade Mother’s lair. It makes her feel comforted and safe, but she worries that it’s not healthy. She’s thought about throwing it overboard, but she doesn’t want to. While Imogen talks, Laudna feels a spike of nerves hit her mind. She’s worried about Imogen and about that crystal.

Laudna tells her that she understands the false security that comes from an ungodly source, but the power belongs to someone else. She warns Imogen to be careful of power that doesn’t feel like hers. Imogen doesn’t think that it’s doing anything to her, but she isn’t sure what it’s doing. That nervous itch hits Laudna again – she should look at the crystal. Laudna asks to see it and Imogen agrees after Laudna promises not to do anything to it.

As Laudna holds the crystal to examine it, Delilah’s voice creeps in, saying that this item is too dangerous in her hands. Laudna demands to be told what it is but Delilah says she’s taken care of it. Laudna’s hand acts of its own accord, squeezing the crystal as she feels heat pass from it to her body. The crystal is now broken, to Imogen’s distress. Imogen tells Laudna that she lied, but Laudna swears that it was Delilah. Imogen leaves and Laudna screams at her patron, but Delilah only thanks her and tells her not to worry.

That is it for Episode 23 of Critical Role!

Anyway, catch Episode 24 on Thursday, May 19th at 7pm Pacific on twitch.tv/criticalrole and on youtube.com/criticalrole or a week later on our podcast. Is it Thursday yet? 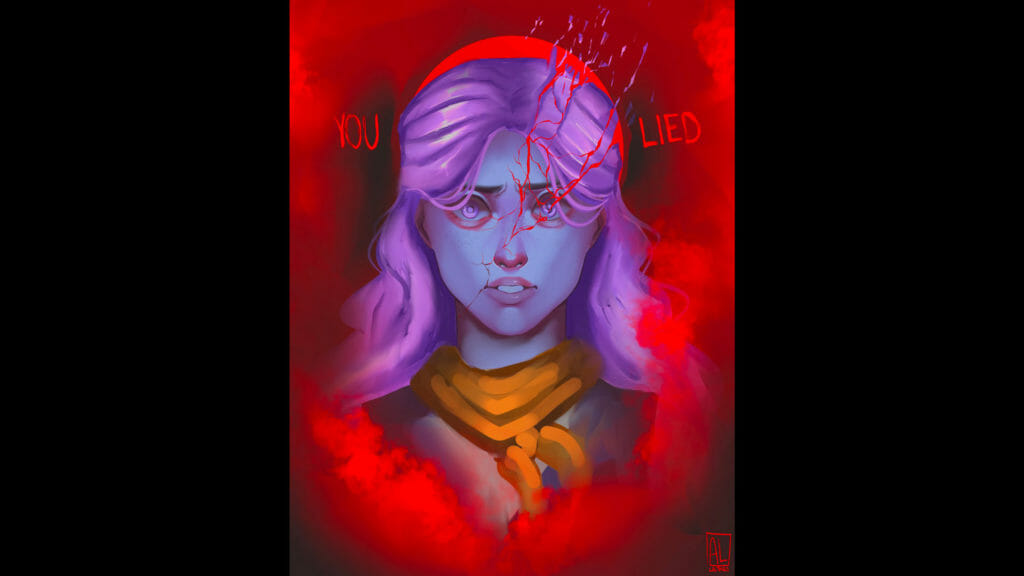