The Mighty Nein continue their flying/floating descent down the anthill-like subterranean levels that make up the Genesis Ward. Jester directs them to B9, where a large waterfall overflows off the side. They land on B9’s ledge and see that the cold, rushing water is coming from farther ahead, up a staircase and beyond. The water is only about an inch thick but the signs of erosion in the chamber indicate that it has been flowing for a long, long time.

While conducting a cursory investigation of the room, Beau notices that her eyes are adjusting quickly to the shadows without the aid of her darkvision goggles. Caleb has had a similar experience and they begin conducting tests to check for more abilities. They discover that they have darkvision, truesight (can see through illusions), and can send their thoughts to others, though cannot hear what people are thinking. But will Lucien be able to control them?

During this testing, Caleb reveals that he first noticed his ability while watching Jester scry – he saw Sprinkle whispering in her ear. Sprinkle comes out from Jester’s hood and begins speaking in Artagan’s voice – how else was he supposed to stay close? It turns out, Sprinkle is the Traveler! This whole time! Professor Thaddeus was just a dick, though.

Artagan maintains his Sprinkle “disguise” in Jester’s hood as they quietly make their way up the stairs. They enter a hallway, finding a door to the right that reads ‘T-dock Project’. Its teal crystal matches the keycard bracelet that they found in a previous chamber. With a swipe of the bracelet, the door lumbers open and reveals another hallway with a chamber at the end.

They investigate the closed chamber, where the walls are lined in lead. A raised platform sits in the middle by experimental machines, which seem to be reading fluctuations in arcane energy, like a seismograph. An intricate runic circle is drawn on the platform – it combines transmutation and dunamancy and is based in temporal alteration.

Caleb and Essek find logbooks that refer to mages Athodan and Ioshadaf studying the primal artifact (a Luxon beacon) and channeling the seemingly limitless source of temporal transmutation. They believe they can anchor a point in one’s history and temporarily shunt oneself there, possibly even eventually expanding to designated anchor points beyond one’s own timeline. Time travel.

During experiments with the temporal dock, an echo of the individual was left behind to anchor them to this point in time. Travel was only for a few seconds but took worrying physical stress on the individual. Spending too long in the temporal dock resulted in the echo fading and the individual never returning. Eventually, the logs end with a mention of difficulty in procuring funding. Both Caleb and Essek are deeply intrigued and vow to return and study more together if they survive their current trials.

The Nein stealth down the hall, avoiding an encounter with another creature, and find two more doors – one is labeled Kitchen and the other is Common Area. The flow of water is coming from the Common Area. Beau quickly investigates the kitchen and finds two Aeorian Absorbers taking a nap in a corner. She warns the others away and they enter the Common Area, which looks to be a now trashed study hall. As Caleb steps up to examine a plaque reading ‘Immensus Hall’ by a doorway, he accidentally triggers a hidden intuit charge.

Everyone is hit by the 300 foot psychic blast. Yasha is knocked unconscious and Fjord is stunned. Caduceus heals Yasha and Fjord shakes off the stun, but other creatures behind them have also been injured and are now beginning to stir. The Nein decide to run, rather than trying to fight the creatures. They move into the Immensus Hall and Caleb sends up a wall of force in the doorway, blocking the path for anything pursuing and forcing the creatures now entering the Common Hall to fight each other, instead.

The stairs descend and the water is now at waist level. Mist covers the tunnel but Beau spots two intuit charges ahead. They move carefully and Caleb is able to use dispel magic on both charges, disabling Lucien’s trap. Under the water, Beau finds two healing potions and an unknown vial of purple liquid. Within cases above the water, they find 15 indentations where intuit charges were kept. It seems Lucien happened upon a stash of charges and now they have no idea how many he has left.

Continuing down the hallway, it opens up to a new, massive room. Veth invisibly stealths ahead, finding two intuit charges on either side of the doorway, but they’re not set to a proximity-based trigger. In the center of the room is a large ring with a crackling blue line in the middle, where water weeps. Veth spots two figures darting around the gate, so she returns to her friends. As they discuss how to dispel the intuit charges, Beau and Caleb hear Lucien in their heads. He’s set up precautions but he’d like to talk first.

The Nein decide to send Beau in to talk while Caleb and Jester swim underwater to try to dispel the charges and the others enter behind her. But the moment they enter, Lucien explains that he will detonate the charges if he deems it necessary, so Beau tells Caleb to stand down. Lucien claims he hasn’t been a poor host, having lent them his book, and borrowed their things with the intent to return them – except the things that intrigue him. He shows off the Cloven Crystal.

Lucien wants to show them his work but he doesn’t trust them, so they’ll have to earn it. Cree wants him to just kill them, but part of Lucien still likes them. Beau telepathically tells him he should listen to Cree. Lucien visibly shudders. Caleb calls him ‘circus man’ and Lucien twitches, confused. Something about those words hit Lucien in a way that he doesn’t understand.

Lucien explains that the Somnovem were trying to get away from those who stifled their creativity. When destruction came, they transported to the Astral Sea, ready to pursue their dreams. But they didn’t account for the psychic storm that wracked their minds. Thousands of people were denied death and broken until they slowly reformed, at one with their city. They had power, but they were fragmented and distracted by their living hunger. Lucien plans to guide the city and offers to make the Nein’s dreams come true as well, should they be friendly and earn it.

He lifts the lever enough to let something from the Water Plane fall through the widened crack, then closes it again. Cree switches out the tuning rods and Lucien opens the gate to its full capacity, encompassing the ring. Now it leads to the Astral Sea, with the Cognouza Ward in the distance. Lucien and Cree leap through the portal and take off towards the city.

As the Nein race to the portal, a tentacular water creature erupts from the ground. They’re forced to fight the creature as they try to make it through the portal. Caleb teleports out of the creature’s grip to the front of the gate. Then, he promptly turns into a sheep due to Aeor’s wild magic. Still, Sheepleb steps through the gate, with others following. Veth, who was turned tiny by Aeor’s wild magic, leaves her mage hand by the lever as she too steps into the portal. One by one, the Nein manage to escape the creature’s clutches and escape into the Astral Sea, with Veth closing the portal using her mage hand and severing the creature’s grip on Jester.

As they are free-floating in the sea and getting their bearings, they take in the unsettling and undulating city in its entirety. Beau and Caleb hear the familiar sound of static and screams, as well as voices welcoming them here.

That is it for Episode 136 of Critical Role!

Anyway, catch Episode 137 on Thursday, May 6th at 7pm Pacific on twitch.tv/criticalrole and on youtube.com/criticalrole or a week later on our podcast! Is it Thursday, yet? 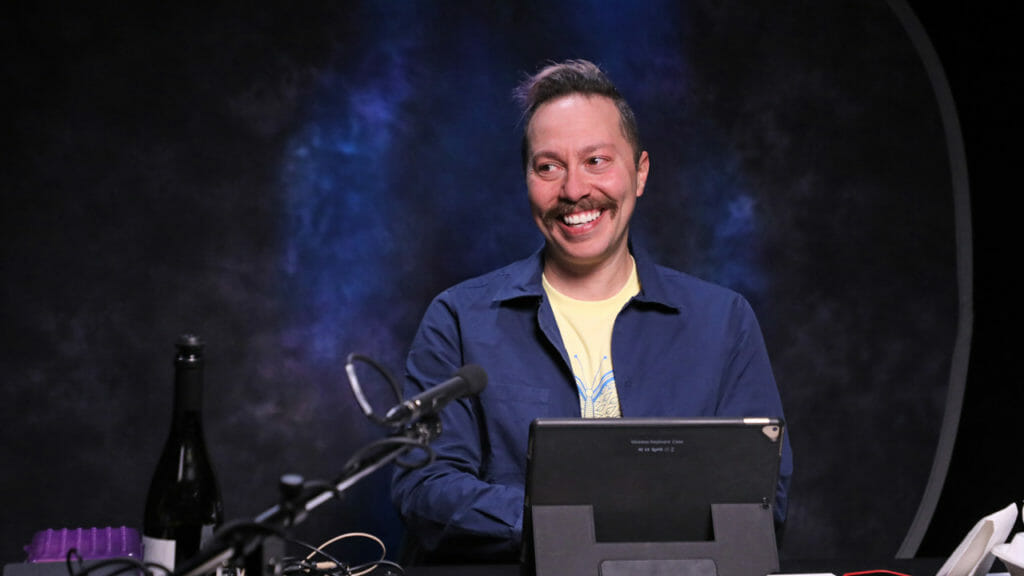