A fight ensues with the salamander creature, whose harsh cold blast hits Caleb so hard that he polymorphs into an ape on his turn to save himself. A combination of Essek holding it in place with magnify gravity, Fjord’s Searing Smite, and Yasha’s (borrowed) Holy Avenger takes the creature down, but a second one appears at the other end of the hallway. After a solid round from everyone, Fjord lands the finishing blows with his blasting glove.

Jester again takes ten minutes to cast commune while Caduceus heals people. She asks the Traveler if they missed any entrances in the courtyard that might have led to the Somnovem. Nope, it’s a standard one entrance place. Are the Tombtakers less than a day behind them? That seems about right. Are Trent and company going to catch up in 24 hours or so? They seem intent on the Nein but they’re not hot on their heels. Essek contacts the rangers, who still have seen no sign of the Tombtakers.

They decide to keep scouting ahead before placing their traps. They must climb up an unnatural icy incline and cross a large gap in the floor, but between the assistance of Capeleb and Beau, both obstacles are cleared. Eventually, the hallway levels out and ends, opening into a massive chamber – a sprawling broken cityscape, dotted with hundreds of blue and green lights. This is the Presidius Ward.

SILENCE IN THE AMPHITHEATER

The Nein are on the edge of a ruined neighborhood, but there are a couple structures that still have intact interior spaces. As they move to one to hunker down for a short rest, Cad notices skeletal remains littering the ground – the aftermath of the cataclysm. Inside their chosen abode are several more bodies, one of which is metallic and pulled apart. Veth removes the orb that once served as its heart, pocketing it for Caleb.

They discuss possible ambush spots, as Jester wants to set up symbol before they try to sleep. They’re nervous about further exploration because it might disturb more monsters, but some want to investigate the cavern for hints about where the Tombtakers might be heading. They decide to send Caduceus, flying and invisible, to scout out the ward. Cad flies above the streets, realizing that the green lights are the dying traces of old arcane light sources. He finds an old amphitheater with a blue dome on a raised platform. He also finds hundreds and hundreds of corpses – the amphitheater was full when the cataclysm happened.

The glowing dome is just like the one the Nein discovered in A2. Within it, Cad sees an officious human woman in a powerful stance, preserved in stasis. There are other bodies on the platform, as well as another robot whose decorations connect it to the woman in the bubble. Cad returns and the Nein theorize about the blue domes – some kind of emergency stasis system maybe, or possibly a result from the beacons protecting those who are consecuted.

Beau pitches an idea – use the courtyard for the trap and the Presidius Ward as the fallback point. If the Tombtakers keep going, maybe then the Nein can follow. They need distance, because the intuit charges incapacitate anyone within 300 feet. Unfortunately, they don’t know enough about the charges to determine what measure of safety they need to take in order to protect themselves from their blast – they contemplate using the tower, the dome, or even the Arcane gate. They return to the courtyard to chart it out and set their traps.

After discussing a lot of potential plans and deciding where to have Jester put her symbol glyph, she and Cad pool their residuum and diamond dust and have Caleb crush the opals. While levitating, Jester successfully places her symbol behind a craggy rock underneath the lip where the cavern opens up, so the Tombtakers have to pass it. She sets its password to ‘dick’ so the Nein can pass the glyph without triggering it. Caleb, Essek, and Beau set the three intuit charges successfully and the courtyard is officially trapped.

Caleb summons Frumpkin to stand sentry and casts the tower in the hallway. Jester begins casting heroes feast, a selection of everyone’s favorite meals. While she does this, Caleb gives Essek a tour, pointing out the dunamancy window and thanking him for joining them on this dangerous endeavor. Caleb takes Essek up to the ninth floor, showing him the beacon room. Essek compliments him on his quick study of dunamancy and asks what his ultimate goal is.

Caleb’s priorities have shifted since their last discussion of such things. The things occurring right now are more important than his earthly grievances. Essek thinks that’s the key. The pursuit of magic often becomes about the self. He’s impressed that Caleb has deviated at his skill level. Essek wonders if it will hold.

Caleb thinks THAT is the key. He doesn’t know what his reaction would be if he was offered what he wanted. Essek knows what the pursuit of magic’s mysteries can bring – both good and bad. Knowing that Caleb can acknowledge this path gives him hope. They both carry a lot of sins. Everything Caleb does is to atone and he’s questioning if there’s only one path. He doesn’t fool himself into thinking he’ll find absolution, but he thinks if he does enough, he might carry it more easily. They return to the others and the Nein take on the benefits of the heroes feast.

The others sleep as Caleb sets up the dome 300 feet from the charges and watches the courtyard through Frumpkin’s eyes. Five hours in, Essek gets a ping from the sending stone. He goes to Fjord, who is keeping watch. The rangers have had a sighting of the Tombtakers and ask if they are to engage. Fjord says yes. Essek relays the message and brings up that this decision is possibly a death sentence. Fjord knows – he’s trying to give the others as much time as possible to sleep and regain their abilities.

Through Frumpkin’s eyes, Caleb sees the intuit charges go off. Caleb drops the tower, waking up the Nein. Veth and Caleb are still far away, but the others can see three prone bodies – Tyffial, Otis, and Zoran. Cree is bloodied but recovering, while Lucien is untouched. He sees the Nein and tells them they’ve fucked up his plans a bit, but well-played. He tells Cree to take care of this. Beau tosses in the arcane field generator, highlighting the antimagic cone. Fjord casts far step, going to Zoran, who is outside of the anti-magic cone. He kills Zoran outright and tells Lucien there’s no way out of this fight.

Lucien agrees. He shifts his antimagic cone to envelop Fjord. Cree runs up to Lucien and wraps her red cloak around him – the two vanish. Fjord is in the cone and Essek is too far away, so no counterspell is possible. Fjord takes out Tyffial and Veth (by request) kills Otis. They take their magical weapons, but the Nein’s bag of holding is missing. The Nein run down the hall and Beau and Caleb hear Lucien in their heads, telling them their attack was more than he expected and he commends their bravery. They’re more of a thorn in his side than he expected. However, he’s excited for them to see his handiwork soon.

The hallway begins to shake, the magical quake lasting for a minute. The hallway ahead is not entirely collapsed, but there is a lot of debris in the way. Lucien’s voice creeps back in, telling them that he just wanted to put some space between them, but he urges them to follow. He’d hate for no one to see the product of his hard work.

That is it for Episode 133 of Critical Role!

Anyway, catch Episode 134 on Thursday, April 15th at 7pm Pacific on twitch.tv/criticalrole and on youtube.com/criticalrole or a week later on our podcast! Is it Thursday, yet? 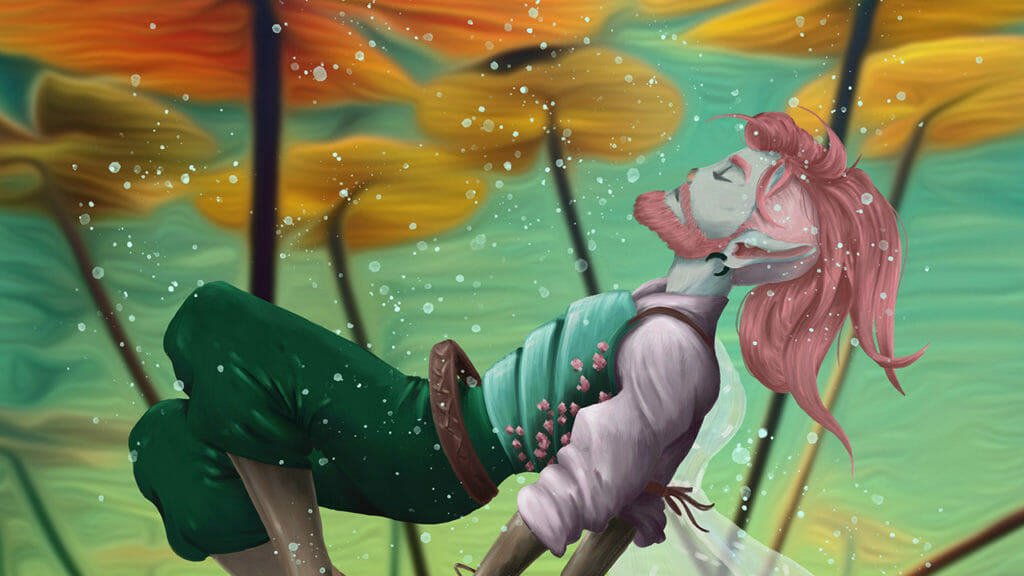