The next installment in our Mighty Nein playlist series is centered on our stormy fallen Aasimar barbarian, Yasha.

And now, a few words from the kick-ass Ashley Johnson.

Apologies in advance because some of this playlist is emo AF. I started building this playlist while I was thinking about a new character for this second campaign. Definitely some major inspirations that impacted the creation of Yasha. These songs have a particular order and they start with what we (sort of) know of Yasha’s past, up until this point.

Starting with her relationship with Zuala.

Now get ready, ’cause I’m about to be dramatic. The order of these songs are the musical, emotional manifestation of Yasha’s journey. At least how I hear it. From start to finish. It’s a movement and I would prefer that you listen to it in that way if possible.

So lay down. Relax. Breathe. Drive. Whatever/however you want to listen. Let’s go on this journey together, shall we?

(Italicized quotes by the Stormlord)

Yasha tried to have a “normal” life. Zuala was a light in a dark place and Yasha was drawn to her like a moth to a flame. Zuala was love and peace and happiness and strength and passion and fire.
This song to me, is kind of about being in love with someone, trying to have a normal life, but being worried cause you’re a freak with possible killing tendencies.
This is what love looks like for Yasha, her version of a love song. A bit tragic before it even starts.

The Secret Wedding by James Horner

The title explains it all and yes this is a fucking Braveheart song. You. Are. Welcome.
Cat’s out of the bag. A lot of Yasha’s character inspo came from William Wallace (the courageous parts at least).

The Pure and The Damned by Oneohtrix Point Never

When Zuala was captured and executed, Yasha ran. Ran so far she ended up in the Xhorhasian Badlands. So much pain and frustration. Feeling every bit the coward she is. What has she done? Should she go back and kill them all? Every last one?
No food, no water. Starting to go in and out, in and out.

In and out. Hungry. Searching. Lost. Feral. And then, waking up at the feet of an old, ruined Stormlord altar. “Your anger is beautiful to behold, Orphan Maker.”
Different. Changed. Her sword, gone. How did she end up here? Why? Keep going. She must keep going. Searching for an answer.

Wicked Ones by Dorothy

And then, the Mighty Fucking Nein walk into her life.
She’ll stick with them, only because they all have something in common. Pain. Anger. Sadness.
Onward ho, mother fuckers.

Fire Under Water by Girl Blue

Not quite trusting this whole group, but at least there’s Molly. Molly will keep her safe and she trusts his council. They’ll stay with them until they give them a reason not to.
And then…someone surprises her when she leasts expects it. Sometimes it’s hard to hold a stare. Even a conversation. It’s best to keep them at a distant though, she decides. Because in her tribe, you mate for life. She made a life-long oath and went and fucked that up. Good job.

Sick of Losing Soulmates by dodie

Molly. Molly. Molly. The perfect soul who found her and pulled her out of the darkness. Lost again. It happened again.
“Loss. Loss is excruciating. Loss is paralyzing. Loss is inevitable. Loss can bring sorrow. Bring hate. Bring cruelty and darkness.”

Sun Gangs by The Veils

Skittish all over again. She realizes it’s better to keep a safe distance from those you care about. It’s better not to care. Leave in the night. Search for more answers. Leave, because where she’s going, she can’t be saved anyway. Continue to search for an answer.

Visions of Gideon by Sufjan Stevens

Connecting with the Mighty Nein again, only as a means to get to where she needs to go. They do have a ship after all. But she doesn’t dare get close again. As they get closer and closer to the storm, she falls into a trance. Visions of Zuala. Some real. Some new. But they felt so real. Were they real? Or just a vision?

My Friends by Oh Wonder

The Stormlord told her, “Loss can instead teach what is important. It offers perspective. It offers focus. Might. The courage to protect what has not yet been lost. To be alone, to push others away, can prevent loss…But it also prevents growth. Strength. Purpose. How much, how many will you lose until you find your strength? Show me what is important. What is worth protecting.”
She could move on. Move on without them. They could be fine. But, she needs them more than she would like to admit. Turns out, this group might be the ones worth protecting.

After The Storm by Mumford and Sons

I’m ending with this song because this is what Yasha sounds like to me. When she’s alone. With her flowers. Dreaming of her. Always. Beautiful and quiet, but above all, sadness. So much sadness. Anger. Pain. Darkness.
But with the tiniest bit of something else starting to claw its way through, dare I say it…Hope.

The Art of Exandria & The Search For Grog Merch! 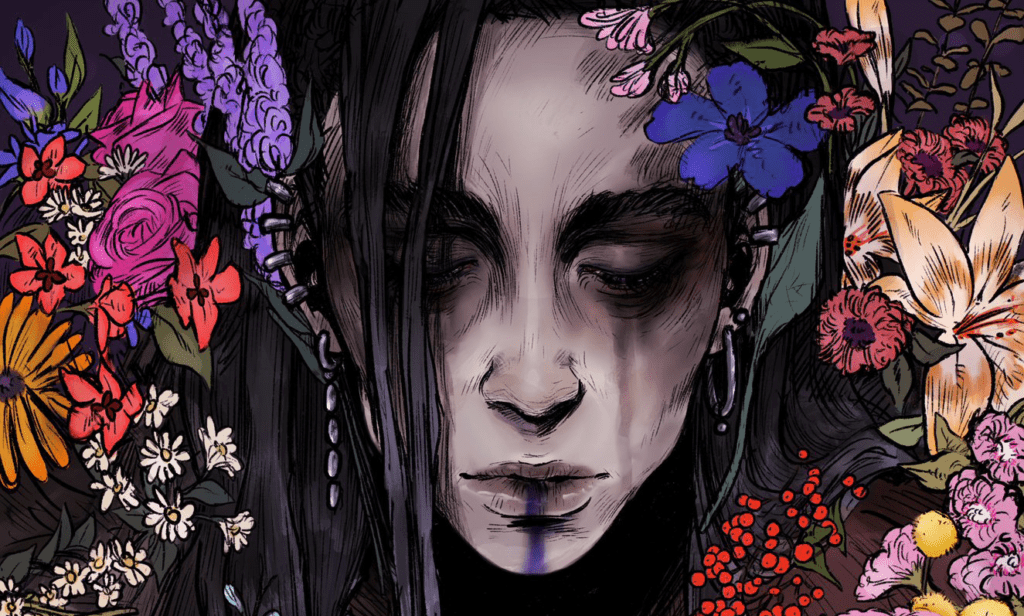