Niirdal-Poc heightens the city’s security as the group encourages a rattled Opal to rest. Dariax returns to the statue of the Observer where he speaks with her again. She is the one who bestows The Gift, a heightening of one’s own intuition. She wants to give Dariax a physical gift as well. He feels something scratch down his back and she gives him a boon to his spear. They speak on why Dariax goes through life like he does. He likes going with the wind, but it’s nice to have a direction, too. This is why he has her favor – he makes bold choices in a world where most are too terrified to choose anything.

Fearne has a dream involving sleep paralysis and the soot-covered Mirror!Fearne. Orym takes a watch and questions his choice to leave his home and his place here with the group, deciding that it’s not time to stop and that he needs to stay and protect his new friends. Dorian is walking the streets, re-tracing the chase and trying to find his axe. He feels guilty about his actions during the chase, that Orym was hurt and Opal nearly kidnapped.

Dorian finds his axe, but as he walks through town, he constantly keeps the Observer’s light in his periphery. He wrestles with the voice in his head, belittling him and telling him how useless he is. It is the voice of the Spider Queen, masquerading as Dorian’s voice, but it’s difficult for him to push the thoughts away… Until he finds himself standing in front of the Observer’s statue and her light quiets the negativity. Dorian sits at her feet, playing his lute, and receives the benefits of a long rest.

In the morning, Opal is struggling with dissociation and leftover shock. Dorian goes to the kitchen and gets some breakfast wine after shoddily posing as a waiter. Orym helps him carry it back and the two discuss the events of last night, with Orym assuring Dorian that nothing that happened was Dorian’s fault. Upon returning to the room, they all discuss why someone tried to kidnap Opal. Opal can’t reach Ted and doesn’t understand why Myr’atta wants her. She wants to go home, but the others remind her of her strength and capability.

Tetrarch Thrascuur enters, encouraging their plan to go south to find Tetrarch Umejii and uplifting Opal with kind words and a boon of five temporary hit points. They give the party a map and directions – follow the constellation of Surrac’s Shield to the final ruin of Niirdal-Sarqet. Then to a river, then to the Beynsfal Plateau. Thrascuur warns that the Iron Authority in the South is a dangerous civilization that worships the Betrayer Gods, but tells them all that Niirdal-Poc is forever open to them now. The group promises to keep the secret of this place.

As (real) waiters arrive with rations, a young tabaxi girl asks the group to deliver a letter to Tetrarch Umejii when they find her. Dariax misreads the situation and believes the girl to be an assassin, scaring her away. The others try to stealthily open the letter, but Orym recognizes the girl as a friend of Elam’s and takes the letter from them. He goes after the girl, who promises she’s not an assassin. Her name is Neera and the letter is actually from Elam for Umejii. Orym impresses Neera and she makes him promise to teach her how to use a sword when he comes back.

As the party leaves the city, Dariax leaves some breakfast wine at the statue of the Observer. They head into the jungle, moving south and consulting their rather unhelpful map. But by following the Tetrarch’s instructions and with the jungle being rather accommodating, they arrive at Niirdal-Sarqet. They find a ring of twenty foot tall stone pillars encircling an enormous stone cube that floats and rotates in mid-air. There is an arcane energy to the air and gravity seems to naturally pull them towards the cube.

There are runic glyphs etched all over the cube and the party begins to study them, using what they learned in Niirdal-Poc to help translate. They realize that the stone pillars are statues of the gods – all gods, Betrayer and Prime alike. The group heads to the cube, with the unusual gravity pulling them onto its various sides and keeping them there. They begin solving the runes, with the cube’s colors glowing as each side is solved.

Orym and Dariax notice that a stone golem with a gem for an eye has joined them on the surface of the cube. Dariax goes invisible as he and Orym warn the others. As they get closer to solving the puzzle, they can feel the energy of the cube beginning to shift. Finally, it is Fearne who puts the entire solution together:

“The universe above, the universe within, remember what came before, decide what happens next, provide for all, a shield to protect.”

Then the cube breaks apart beneath their feet.

The cube shatters, but its pieces (and the party) stay floating in the air, the gravity still holding to the area. The party realize that they can use the unusual gravity to their advantage by making their attacks heavy or light, altering the amount of attacks or the amount of damage. The arcane miasma that surrounds them offers other boons, as well, like giving Fearne the ability to adjust others’ fate by calling for a re-roll of any d20 roll within thirty feet of her and giving Opal a small healing pool to dole out.

Three more constructs join the fray, seemingly made from the group’s own health, as each one seems to reduce a party member’s hit point maximum upon arrival. As they fight, Opal and Fearne are asked what they fear most (never seeing Ted again and something bad happening to Nana, respectively) and these fears cause the constructs to go after something they hold dear – Opal’s necklace and Mister. When Dariax uses his favored by the gods ability, the Observer’s gift is shown to all – he sprouts wings from his back, giving him the ability to fly.

As they fight, Opal is pierced with residuum tipped darts, tethering her to an unseen assailant. Opal is knocked off her cube section, but Dariax’s new flight allows him to catch her and take her to safety. Two of the constructs are taken down by Dariax, one is knocked off into the mist below, and the last is killed by Dorian, refuting the cruel voice in his head telling him that he’s not good enough.

Opal takes off toward the treeline in an effort to figure out who is tethering her, but as she does so, Myr’atta Niselor steps out. She jams a residuum spike into the ground, causing Opal’s body to become heavy and collapse to the ground, as well. Myr’atta looks at Opal and says that she’s going to free ‘you’. That they’re going to do so much together. But she’s not talking to Opal. She’s talking to Ted. She’s not worried about the party. Myr’atta has gone through too much to fail now.

That is it for Episode 7 of Exandria Unlimited!

Anyway, catch Episode 8 (the finale!!) on Thursday, August 12th at 7pm Pacific on twitch.tv/criticalrole and youtube.com/criticalrole, or a week later on our podcast. Is it Thursday, yet?

FAN ART GALLERY: Whatever It Takes 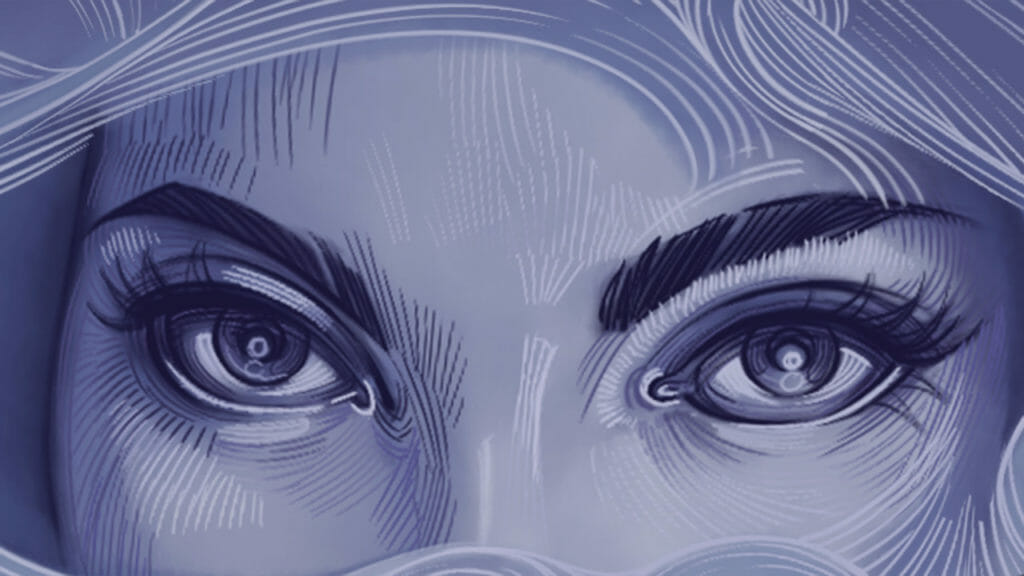