After getting a room at the Spire by Fire, Bells Hells discuss the death of Lord Eshteross and the letters he left behind. Imogen grapples with the guilt of having led Otohan to Eshteross and thus his death, but Ashton believes that this group is his legacy; that they are his eventual victory and revenge. Imogen messages Mistress Seshadri, informing her of Eshteross’ death and that they have documents for her. Seshadri appreciates the honest information and will meet them at their tavern room.

The group checks in with Laudna, who is doing the best she can. She doesn’t know how to repay her debt to them or even properly express her gratitude. They assure her there is nothing to repay – they wanted and needed her back. Fearne realizes that the necklace she took stayed behind in the dream world. Laudna explains that the necklace was a gift to her mother from her father. The three gems represented the three members of their family.

FCG asks about the name Matilda. Laudna explains that her name was Matilda Bradbury, but over the years of being alone she essentially forgot who she was. She used to sing to herself and to Pâté and the ‘la la la’ notes of the songs slowly turned into the name Laudna, which is the name she prefers. Laudna doesn’t know if Delilah is still her patron – she hasn’t heard from her but can still use her warlock powers. Laudna was born with magical abilities, though. Her parents encouraged her to harness them, thinking they’d lead her to a better life.

Bells Hells are surprised when they are interrupted by a knock on the door, behind which is not Mistress Seshadri, but Ollie and Gus of the Greenseekers. The detectives are here on behalf of Seshadri to take the group to Eshteross’ estate to be interrogated as suspects in his murder. They explain that this is just protocol and they don’t actually believe that the group killed him.

The Greenseekers give them a few minutes to get ready and Chetney decides to read the letter from Eshteross to Seshadri. The letter reminisces on the work Eshteross did for her and the goodwill they had and ends with him telling her about Bells Hells and the Grim Verity and to not get in their way. Laudna casts mending to reseal the letter and Bells Hells go with the Greenseekers to the crime scene.

Seshadri meets them at the estate along with several high ranking Wilders. The guards bring down the body of Lord Ariks Eshteross, where it is inspected by Grave Mystic Weva Vudol, a delightfully macabre cleric of the Duskmaven. She casts speak with dead on the body and asks him questions, learning that Eshteross was killed just two days ago by the Legend of the Peaks, Otohan Thull, that Bells Hells are innocent, and that his final requests are to be interred next to Mistress Prudaj. Seshadri will ensure that this final request is honored and releases Bells Hells from suspicion.

Seshadri wants to hire Gus and Ollie to find Otohan, but they immediately decline. Otohan is above their pay grade. Seshadri instead hires Bells Hells, who are willing to hunt down the Legend of the Peaks. As for these “peaks”, they refer to the Coven Peaks, a mountain range that is home to the Stratos Throne, and Otohan’s time as a warrior during the Apex War. Imogen has distant memories of the war and realizes that it’s possible that Otohan could have traveled through her town of Gelvaan during this time.

Bells Hells gives Seshadri the rest of Eshteross’ letters, including her own. Chetney confesses to reading her letter and she’s amused by their ability to open and reseal it without her realizing. She will ensure that the skyship documentation is transferred to their name swiftly so that they can get back on the road. Weva, meanwhile, takes an interest in Laudna and is able to tell that she’s recently returned from the dead.

The group takes a moment to say their goodbyes to Eshteross. Orym druidcrafts a black violet for him and promises to follow this thread to the last breath. Imogen thanks him for trusting them and bringing them together. Ashton tells him they’ll get to work. They take a few trinkets from his estate and Laudna sends Pâté to collect the spices for the cookies from his kitchen before they all depart.

They go to the Soot and Swill to rest and the next day, they discuss the anti-revivification toxin that was used on Eshteross, as well as on both Orym’s husband and father-in-law. FCG is certain that the toxin is nothing that he’s encountered before in the natural world. They also take a look at Turmoil, Eshteross’ cane that can transform into a magical scythe. Ashton and Chetney both try it out, though it goes to Chetney for now.

They have breakfast and catch up with Pretty the cook before heading to the Aerie Spire to see about their skyship. While the paperwork is finalized, they speak with Captain Xandis. The ship still needs some repairs and Xandis gives the group two options for the travel to Yios – a less dangerous but longer trek via the shipping route or a slightly shorter but more dangerous path above the Hellcatch Valley.

The group stays one more night in Jrusar to allow the skyship to finish repairs and to finish gathering spell components like diamonds and rubies. The next day, they board the Silver Sun and take off on the more dangerous route, possibly aiming to hit the Gloomed Jungles in search of the Gorgynei werewolves on the way to Yios. On the third day, they hit a dust storm, but their previous experience with one keeps them mostly safe this time.

On the night of the fourth day, Ruidus flares in the sky. Chetney is on the deck of the ship with Orym and Fearne. While normally his lycanthropic gift is tied to Catha, this flare causes him to lose control and wolf out. He attacks Fearne and Orym, who keep him at bay long enough for him to regain control of himself as the flare ends. All of them are surprised that he transformed due to Ruidus, which Chetney says has never happened before.

Meanwhile, Imogen is having a pleasant dream for once in which she is baking in a hut with Laudna. As the flare begins, the hut fills with red light. She steps outside and sees a shadow walking away that looks like Laudna. She gives chase, but when she catches up, she realizes that this individual is actually her mother, who tells her that she needs to run.

Her mother vanishes into the storm and Imogen shouts at the flaring red moon, demanding to know what it wants. She destroys the hut with a lightning bolt and flies into the air and to the stars, heading for the moon. After a few moments, the flare ends and Imogen falls back to the ground before waking up. She immediately casts sending to her mother, asking if she is there. To her surprise, she receives a response – her mother’s voice, saying her name.

That is it for Episode 39 of Critical Role!

Catch Episode 40 on Thursday, November 10th at 7pm Pacific on twitch.tv/criticalrole and on youtube.com/criticalrole or a week later on our podcast. Is it Thursday yet? 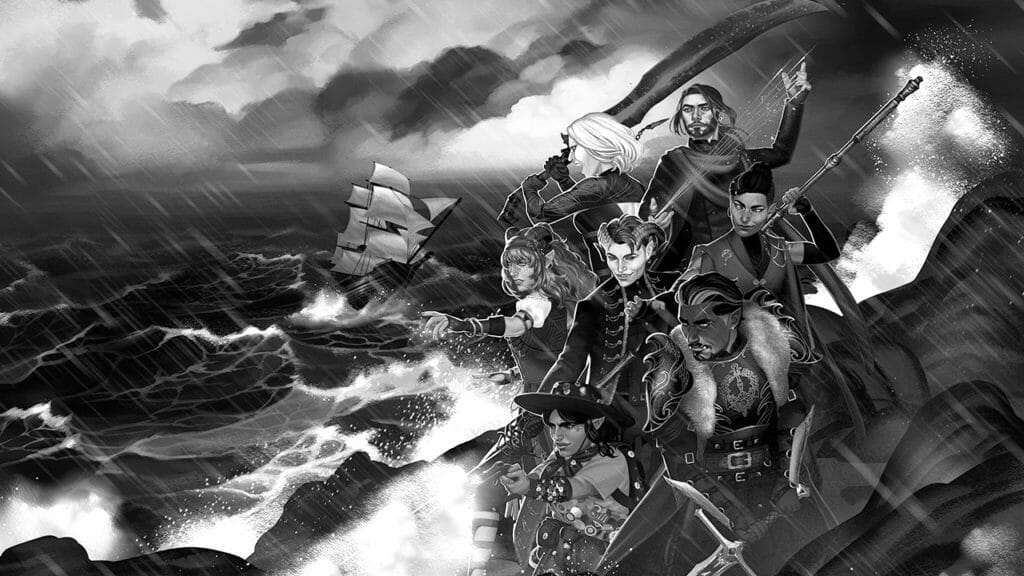