Bells Hells are immediately thrust into combat with the two clay constructs that formed during their attempts to break the glass surrounding the Wind Folly earring (the target of the heist). Laudna and Ashton’s combined hammer efforts cause the box to splinter, but it still holds together. When she moves away from the box, Laudna is knocked unconscious by the constructs, but Fearne heals her. Imogen successfully casts command, forcing the constructs to grovel as Chetney finally shatters the box and grabs the earring.

Everyone rushes for the exit, cramming into the trapped stone lion room, but the door leading out is barred shut. The Verdict used the group’s own immovable rod against them, trapping them inside the chamber. Bells Hells are forced to keep fighting the clay constructs, with Fearne and Orym getting the killing blows on the creatures. FCG attaches the earring to the roof of his mouth with the magnets from Laudna, hiding it away just in case.

Imogen discovers that the second door in the chamber leads to another stone lion room. Chetney locates two of the trapped tiles on the floor and Imogen explains that her telekinesis can trigger a tile trap from a distance, even without sight. Bells Hells close both doors and stay quiet waiting for The Verdict to make an appearance while FCG heals everyone a bit. Eventually, The Verdict enter the second lion room and Imogen triggers the trap – the lion sprays fire at the group. Imogen triggers the trap two more times before The Verdict flee.

Bells Hells leave the chamber and head to the first room, discovering that two members of The Verdict, including Hutchin, are unconscious. FCG casts spare the dying, stabilizing them both, and Fearne heals Hutchin. These healing efforts pacify The Verdict and both groups agree to stand down. Bells Hells convince the others that the final room was too much for them and they are leaving. Orym collects the immovable rod and Chetney swipes the Vespin Chloras journal before they head up to the first floor of the museum, leaving The Verdict behind them.

Ashton steals a helmet from the Hishari armor and Orym recalls that the Hishari was a village in Issylra led by a single charismatic leader. It was found decimated years ago and became a cautionary tale of the dangers of cults. Back on the first level of the house itself, Ashton reveals their anger about Evon lying to everyone about the deadliness of the traps. He wants to look around Evon’s bedroom and try to find something embarrassing, both out of contempt and to stipulate the bonus portion of their contract with Jiana.

Upstairs in Evon’s office, Ashton, through sheer spite, unlocks a very difficult locked drawer and finds a stack of paperwork and a pair of glasses. A satisfied Ashton takes it all, relocks the drawer, and Bells Hells leave the Twilight Mirror Museum. They avoid the guards and return to Evon, giving him the earring Wind Folly and completing the heist. For a “prize”, Evon magically places their visage in one of the paintings in the foyer.

Bells Hells leave the museum behind them and camp outside of town, fearing potential retribution. In the morning, FCG casts remove curse, successfully curing Imogen of her blue hue. FCG then casts detect thoughts on Imogen, attempting to push deeper into her mind but she shuts them out. FCG has noticed how tense she’s become and just wants to make sure she’s okay. Imogen appreciates the concern but tells him to never do that again. FCG apologizes, but still keeps an eye on her.

FCG casts identify on the glasses, discovering they are Eyes of Charming and can cast the spell charm person. As for the paperwork itself, the pages are blank and magically protected. Chetney takes a look at the last page of the Vespin Chloras journal, finding it poorly written and filled with ellipses – a clearly fake book, though Laudna keeps it for material. Imogen sends a message to Jiana letting her know that they won and are heading back.

They return to the Heartmoor Hamlet to pick up the horses. Chetney and Orym go to Knot Forgotten so that Chetney can meet Zadro Ichlen, the toymaker. He chats amiably with her until she mentions being from Uthodurn. Chetney asks about Oltgar, causing Zadro to turn hostile. Tension rises, but Zadro and Chetney agree to forget they met each other. Zadro says that if Chetney ever sees Oltgar again, to tell him that she is armed and he is not welcome. Upon leaving the toyshop, Chetney tells Orym that Oltgar was his mentor, a terrible person who betrayed the craft. He hates Oltgar with a passion and thinks Zadro was a spy.

Chetney and Orym are approached by Estani, who nervously tells them about a club that he was once a member of as a younger academic, a club that the Lumas Twins also joined – The Grim Verity. This collective of scholars has evolved from underclassmen debating absurd theory to a unified group attempting to uncover conspiratorial secrets of history that could be considered blasphemous. The group itself isn’t dangerous, but their curiosities lead to dangers befalling them, as they investigate things that powerful people don’t want examined.

If Bells Hells go to the Aydinlan Seminary in Yios, Estani tells them to find his old friend Ebonold Kai, a professor at the Seminary. Estani gives them a letter to give her, which will vouch for them and should help them gain assistance in finding justice for the Twins’ deaths. Chetney and Orym return to the others and Bells Hells begin the trek back to Jrusar.

The trip back is faster and fairly uneventful in terms of roadside dangers. FCG identifies the enchantment on Evon’s paperwork, learning that cold exposure will reveal the writing. Laudna casts ray of frost on each page, allowing them to read through the documents. Mainly they are letters with various dealers on shipping and delivering artifacts from around the world, with one recurring name reading ‘Sp. Y. Sh-n’ – Orym recognizes this to be Spireling Shenn, a leader of the Tal’Dorei crime syndicate known as The Clasp.

There is a spy report on Jiana’s dealings with Wildemount, mentioning three shipments months apart that are delivered to her and are then picked up by an unknown figure. Each is a crate of a specific size. Ashton recalls that he found a crate like this during the burglary on Jiana’s estate. They pulled something out of it, but can’t remember what. Ashton keeps the spy report, not returning it to the documents. The last pages are invoices for a religious spear and a twisted metal sculpture – the fake spear and the fake beacon from the museum.

After a few days of travel, Bells Hells arrive at Jrusar. The horses are safely returned to the stables and the group returns to the city.

That is it for Episode 21 of Critical Role!

This week, catch our Red Nose Day adventure with Stephen Colbert on Thursday, April 28th at 7pm Pacific on twitch.tv/criticalrole and on youtube.com/criticalrole or on Monday, May 2nd on our podcast. Episode 22 of Critical Role will air on Thursday, May 5th! Is it Thursday yet? 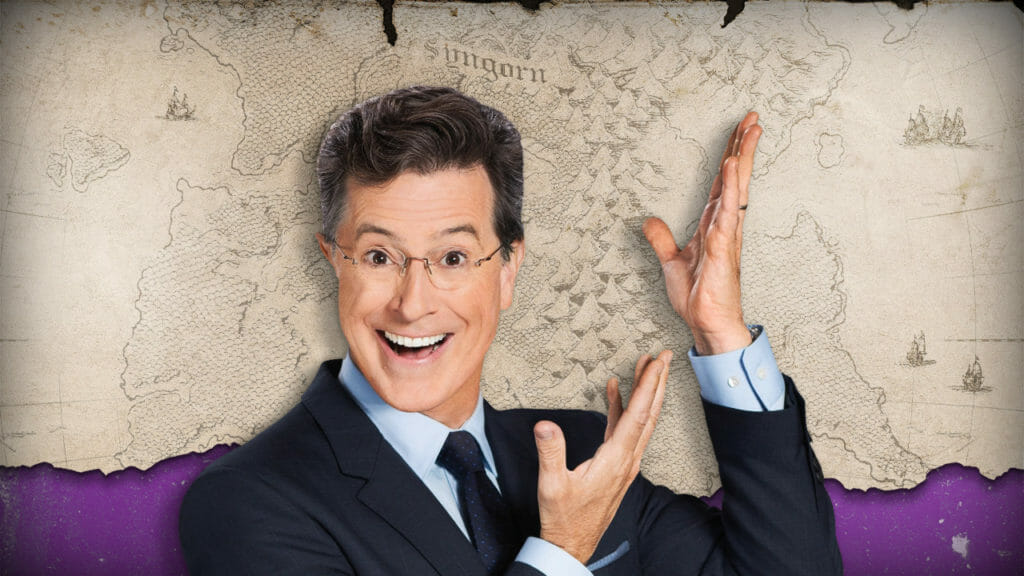