And now, we’re ready to embark on a brand new and very special journey together: our very own tabletop game publishing company, which we have lovingly named Darrington Press.

Check out our sweet logo!

Darrington Press is headed up by a longtime board & tabletop roleplaying veteran (and also one of our most cherished friends), Ivan Van Norman. Ivan has been producing tabletop games and media content for 10 years, as a co-owner of Hunters Entertainment (Alice is Missing, Altered Carbon, Outbreak: Undead) as well as consultant to many other companies, including Wizards of the Coast and Hersch Games (Taboo). He’s danced the line between media and design, working as a producer of board/RPG content for several digital media projects as well as a game producer on Wil Wheaton’s TableTop. He also briefly served as executive producer of International Tabletop Day. Matthew Mercer, who you may know as our beloved Game Master and Chief Creative Officer, has also joined the Darrington Press team as Creative Advisor. Along with being one of our founders and a bright guiding light, Matthew is also a mega accomplished voice actor (Overwatch, Attack on Titan) and has been working closely with Ivan and our creative teams to develop our upcoming game slate. In fact, with that awesome segue, we’re inexplicably proud to present our 2021 Darrington Press game slate. A battle for life and death on the high Lucidian seas! This flagship title from Darrington Press is a tactical game of semi-cooperative card play as factions of sailors vie to be the last claimed by the raging sea leviathan Uk’otoa. As the ship slowly falls into the ocean, you’ll have to run, push, and sacrifice others to win! Fans of Critical Role know Uk’otoa as the ex-patron of warlock Fjord (played by Travis Willingham). Who could say whether these tales hold any truth? Fjord isn’t telling.

This game is suitable for 3-5 players, aged 12+, and each game should run about 30–45 minutes. And, of course, we included a VERY COOL Uk’otoa mini.

Uk’otoa will be available on launch day in the Critical Role online shops in the US, UK, and AU, and we encourage you to contact your friendly local game store and see if they might be able to place a pre-order for you. We believe very strongly in supporting local and small businesses while we’re doing our best to stay safe amidst the COVID-19 pandemic.

We’ll share more launch day details just as soon as we can, so stay tuned!

Q2 2021
Embark on your own journey through Exandria with Critical Role Adventures! Play as the upstart adventurers Vox Machina and overcome treacherous challenges. This cooperative legacy-lite campaign game uses a unique, narrative mechanic for social and combat encounters, luring you back session after session. Within this enormous box, you’ll find a host of hidden treasures and a rich storybook to guide you through thrilling combat, dynamic character growth, and tales worthy of the name Vox Machina.

Q3 2021
Syndicult is an original modern magic roleplaying game designed by Matthew Mercer in which mob families jealously guard secrets and battle it out for power on the city streets. Featuring a simple storytelling dice mechanic, Syndicult is a low magic world where all bets are off.

Q4 2021
Fight the monsters, save the party! Guardians of Matrimonia is a cooperative card game where players have pre-built decks that are pitted against a deck of monsters (party crashers). If your deck runs out, everyone loses. But if you battle your way through the entire party crasher deck, everyone wins!

More details (including art, creative teams, and all sorts of awesomeness) about Critical Role Adventures, Syndicult, and Guardians of Matrimonia will be available in the coming months.

As always, we are incredibly thankful for you and wouldn’t be able to create games or tell stories without the support of our community. We hope that the games that we make encourage you to create your own stories and escape for just a bit in a wondrous imaginary world where the possibilities are endless. A First Look at Our New Lineup from Vox Machina Origins 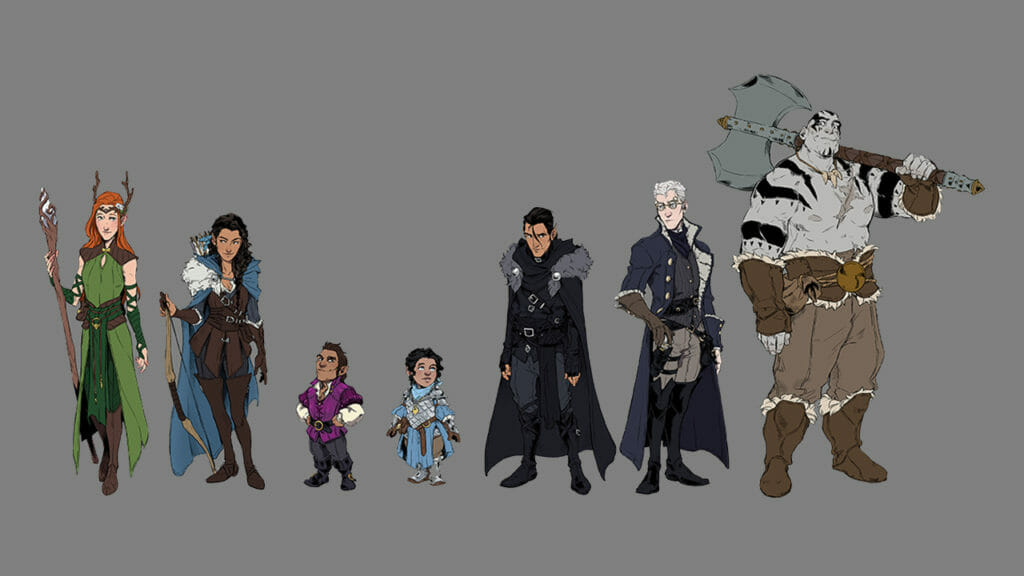