CASTLE ON A HILL

Bells Hells step through Keyleth’s tree portal onto the streets of the city of Whitestone, having teleported an entire continent away to Tal’Dorei. Keyleth leads them to the castle and asks to see Laudna’s body. She explains that the reason they were unable to resurrect both Orym’s husband and father-in-law in Zephrah is due to a toxin the assassins used that is specifically designed to prevent divine interference and resurrection. Keyleth confirms, though, that there is no trace of this toxin in Laudna.

Within Castle Whitestone, Captain Kynan Leore leads them to Lord Percival de Rolo’s meeting chamber. Just outside, Keyleth receives an urgent sending message. Keyleth must leave, but she thinks they will find help here. Bells Hells quickly give her a rundown of everything they’ve discovered about Ruidus; Keyleth will put all of that on the pile. She’s also dealing with both good and nefarious entities preparing for the apogee solstice in myriad ways, as well as the other Ashari leaders dealing with a rogue faction in Issylra.

Keyleth leads them into the office, where she introduces Bells Hells to Percy before departing. Percy is hesitant to help and it takes some convincing of Laudna’s importance and role in Vox Machina’s past (as well as a sweet interruption from Percy’s youngest daughter, a tiefling named Gwendolyn) before he calls for the assistance of cleric and baker Pike Trickfoot. While waiting for Pike, the group catches a glimpse of two of the teenage de Rolo children and meet Lady Vex’ahlia de Rolo.

Vex is delighted to meet them and thanks them for safely delivering Bertrand Bell’s body to their care. She hopes Pike is able to help them and leaves after her children to clean up. Pike arrives and Percy explains that her resurrection skills are needed. Laudna was one of the Sun Tree victims – the people who were murdered and hung from the Sun Tree as a warning to Vox Machina. Vex returns and realizes that Laudna is specifically the woman who was dressed up to look like her. Vex is determined to help her.

Pike begins the resurrection ritual. She can feel Laudna’s soul adrift, as well as something holding Laudna back. She releases the spell, shocked as she explains that there are two souls bound to this body – both Laudna and Delilah Briarwood, the woman who murdered Percy’s family. Pike explains that Delilah is preventing Pike from reaching Laudna. If she finishes the ritual, she isn’t sure which soul will return.

Percy refuses to bring Delilah and her evil back into the world. Though Orym reminds Percy that his own soul was once held by another, he remains unmoved. Pike believes that there are some spells from her goddess, the Everlight, that could possibly help separate the two souls. While the others go with Pike to her cottage, Ashton follows Percy upstairs, arguing with him about loss.

Ashton has lost everyone, but he isn’t here begging for their lives. There are things going on that have made Ashton feel like a small fish in a big pond and Percy should pay attention. Percy advises Ashton to channel their rage into creation. If they bring Delilah back, Percy will destroy them all in order to keep his family and his city safe. He tells Ashton to make some waves. Ashton goes downstairs and punches a bust, then makes the acquaintance of an elderly bear and his two cubs before rejoining the others.

Pike goes upstairs to look for the spells while Vex apologizes to Bells Hells for Percy’s attitude, explaining that he has an immense amount of trauma wrapped up in the Briarwoods. Pike returns, having found an older ritual that will enable the spirit to journey to another realm. She believes she can send the souls of Bells Hells to the place where Delilah is holding Laudna and separate them long enough so that Pike can bring Laudna back.

Pike explains that their bodies will stay here while their spirits travel to this realm. If they fall unconscious, their spirit will return to their body. They have to protect the cord that connects their spirit to their body – if this cord is severed, they will die. When Pike attempted the resurrection, it was Delilah who reached out to return. Pike and Vex assure them that Delilah is now a fraction of her former self, but warn that she is still not to be underestimated.

If they can separate Laudna and Delilah, Pike might have a chance to banish the necromancer for good. Imogen or FCG can use sending to let Pike know that they’ve separated the two. FCG is unsure if he will be able to go, as he is still not sure that he has a soul. Pike casts a spell on FCG, allowing them to see their own soul. FCG is alive and Pike tells him there are divine eyes already on him, as the Changebringer coin sits in their chest. FCG is worried; this now means that he must live. His life matters. Bells Hells assure them that was always the case.

Vex allows Orym to borrow a magical shortsword for the fight against Delilah and Imogen gives the purple crystal to Pike, letting her know that Delilah wanted it. Pike needs 6600 gold worth of jacinth and silver bars for the spell, which Vex is willing to give for the spell. The group wants to pitch in and mention their residuum, which surprises Vex. Orym promises to tell her all about it later. She grabs the materials and Pike prepares the spell, which takes an hour to cast.

Bells Hells lay down on the floor, with Laudna’s body in the center of their circle. Pike casts the spell and their souls are transported to another plane. Their bodies shimmer with a golden shine and a gossamer cord lifts from their heads into the ether. They are surrounded by darkness and fog, the floor a cracked dark stone that falls away into cliffs. As they walk, the fog rolls away from them, revealing the jagged floor that eventually transforms into a forest made of stone.

They can hear whispers in the wind that threaten “the witch” and spot a stone structure in the distance – a ramshackle shack in the woods. Chetney looks inside and sees a quaint interior with a table that holds a rat body and a bird skull. A shadowy humanoid shape with a purple light in the chest sits on the stool; this must be Laudna. The whispers become louder and a fire lights up the shack as shadow Laudna vanishes.

Three fabric shadow creatures appear and the group fights them. They successfully kill the shadow monsters and Fearne casts tidal wave, putting out the fire in the shack. They go inside and Orym finds a rotted floorboard. He rips it off and reveals tangled roots in the ground that lead to a tunnel.

They forego a short rest and make their way down the tunnel, Chetney in the lead. Eventually, Chetney finds an opening that leads to a gentle green light. He looks out, peering from between the roots of a tree to see a crumbled wall, rooftops in the distance, and a massive leafless tree that looms over city streets that are lit with that same green light.

That is it for Episode 36 of Critical Role!

Catch Episode 37 on Thursday, October 13th at 7pm Pacific on twitch.tv/criticalrole and on youtube.com/criticalrole or a week later on our podcast. Is it Thursday yet? 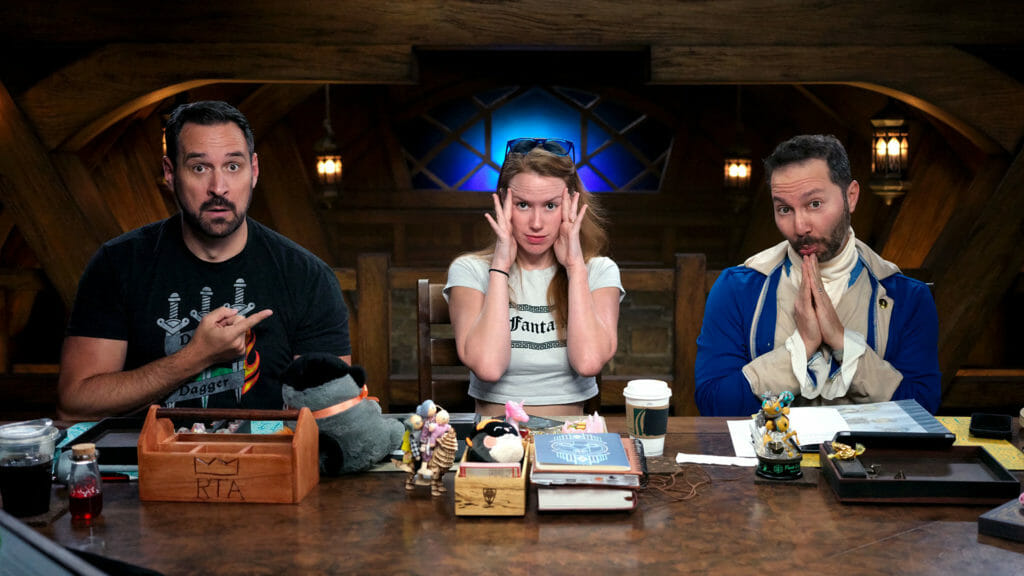