As the Mighty Nein descend into the Aether Crux, they are greeted by the opening of a cocoon, revealing Lucien’s second form, now fully connected to the city of Cognouza. Armed with clawed wings, able to send the Somnovem’s eye stalks around the room, and even able to control parts of the city itself, Lucien is now more dangerous than ever. A chaotic battle breaks out immediately, with the Nein discovering that destroying Somnovem eyes hurts Lucien as well. Some of the Somnovem eyes are able to bestow a red eye upon their target as part of their attack, eventually leading to each member of the Nein having at least one eye.

Due to the nature of Cognouza and the Astral Sea, the Nein begin using their imagination to will things into existence to both hurt Lucien and remind him of Molly, summoning glaives, circus tents, tarot cards, eggdicks, and more. Jester is slain, but Caleb channels his imagination to telekinetically move her close to Caduceus, who is able to revive her. Caleb calls out to Molly that he is killing Jester, who Molly loves, and Lucien’s own hand rakes across his face.

With Fjord’s marine layer protecting the clerics and the low on hit points Veth, the Nein continue attacking but eventually Lucien’s wings strike Caleb down, killing him. Finally it is Jester’s turn, and with Caduceus having hit Lucien with path to the grave, she sends out a guiding bolt, telling Molly that she knows he is in there, that he is loved, and that Lucien doesn’t deserve him. As the magic burns him, Lucien physically tears himself in twain. The Neo-Somnovem is defeated. Both Lucien and Caleb lie dead on the ground.

As the Nein reel from the battle’s end, they begin to hear voices in their minds, thousands of voices all saying the same thing – thank you. They see motes of light floating up and out of the city, lives now able to rest after a thousand years of suffering. Jester and Caduceus race to Caleb’s side. Jester (aided by a finally present Artagan) is able to revive Caleb. With their wizard safe, the Nein all turn to the body of Lucien…of Mollymauk Tealeaf.

Yasha and Beau free him from the floor and Caleb puts his transmuter’s stone on Molly’s chest. Though there is some trepidation about accidentally bringing Lucien back instead of Molly, they all agree that they have to try. This is what they came here for, at the end of the day. Before they begin, Fjord looks for the bag of holding, unable to find it. But Jester’s powerful imagination wills the bag from the very walls of Cognouza itself, returning both it and the Cloven Crystal to a deeply grateful Fjord.

Caleb uses his transmuter’s stone to cast raise dead on Molly. A resurrection ritual begins. Yasha takes out Molly’s coat and lays it over him, telling him how much she misses him and pleading with him to come back to her. Jester takes out the tarot cards and tells him that she’s learning and she really needs him to come back and teach her. Beau takes his belt and presses it to his heart, trying to get the blood pumping again. They weren’t strong enough to save him before, but things are different now. It’s time to remind her what an asshole she is.

With the ritual in place, a roll is made to recover the soul of Mollymauk Tealeaf. It’s a Natural One.

Though Molly’s body is whole once again, the ritual has failed, and he remains lifeless and cold. The Nein are devastated, but they can take him to the Blooming Grove and bury him in a beautiful place. Essek is particularly upset, remarking on the unfairness of life. Fjord comforts him, telling him that life changes and grows, that even an end is the beginning of another trip. Essek has a long life ahead of him in which to study and channel his grief and regret into turning things around. Fjord has seen all he needs to see from him.

Beau knows this trip wasn’t a loss, despite Caleb feeling like their victory was still a defeat. They have saved so many lives today, thousands of lives who were trapped and the lives of everyone in Exandria. No one will ever know what they did, but it still mattered. It was still important. They all wish there was more they could do for Molly.

As Caleb begins casting the vault of amber to take Molly’s body, Caduceus quietly casts divine intervention. He implores the Wildmother to ‘put it back’ – they’ve earned it. The successful divine intervention allows a reroll on the ritual. This one is a 12. As the city begins to slowly decompose, vines and flowers and moss encase Molly’s body. An ocean breeze rolls through as the greenery falls away. Mollymauk Tealeaf opens his eyes.

Molly bolts, looking around in confusion. He begins repeating ‘empty’ over and over. Yasha goes to him, telling him he is not empty. He calls her ‘Love’. Then begins looking around the room, seeing each of the Nein. Magician. Tinkerer. Joy. Sea. Rumor. He is Empty. Jester paints him more clothes as Yasha re-introduces herself. She’s the same, but some things are different. She fell in love! Beau re-introduces herself.

Jester thanks Caduceus for what he did and he explains that he simply asked politely. Essek is impressed by Caduceus, telling him he knew there was a way. Cad thinks Essek has a bright future ahead of him. He’s already saved a lot of lives and he is welcome at the Grove. For now, they need to give Molly some time. They also need to go home. With some healing taken care of by Fjord, Caduceus casts plane shift back to the Blooming Grove and the Mighty Nein leave the slowly decaying city of Cognouza behind them.

That is it for Episode 140 of Critical Role!

Anyway, catch Episode 141 (the FINALE) on Thursday, June 3rd at 7pm Pacific on twitch.tv/criticalrole and on youtube.com/criticalrole or a week later on our podcast. Is it Thursday, yet? 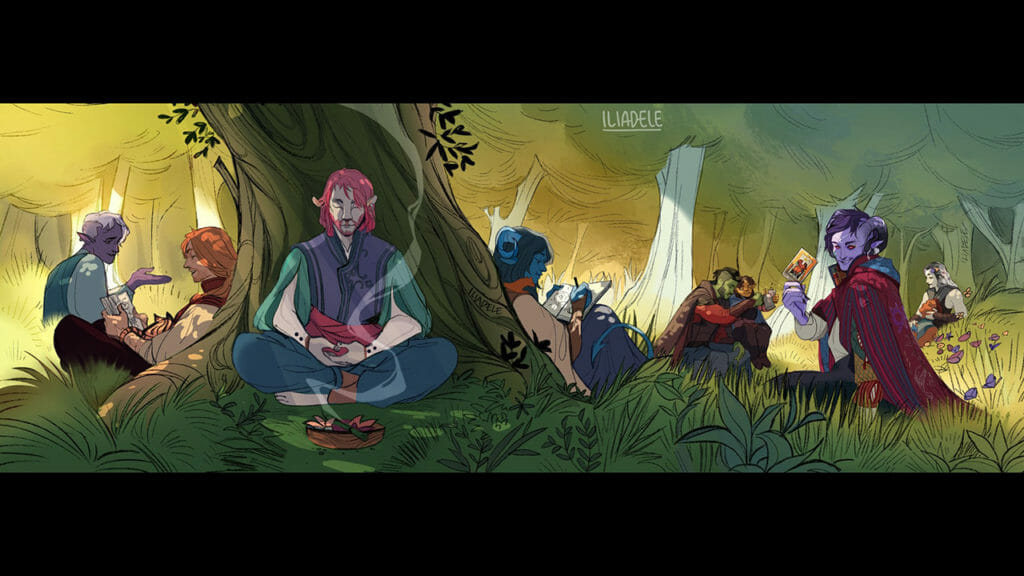